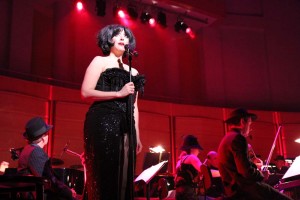 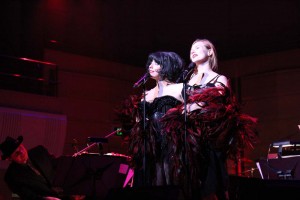 “At the end of this Weimar cabaret concert, Barry Humphries described the music’s unsettling duality. It is full of free-spirited, fun-loving gaiety and energy yet also shot through with world-weary cynicism and a sense of impending doom ultimately fulfilled by the rise of Nazism.
The great achievement of this concert was how Humphries, cabaret singer Meow Meow and the ACO captured this complex and contradictory zeitgeist.
Humphries has had a life-long love affair with the music of Weimar Germany (1918-33). Playing the role of conferencier (master of ceremonies) in true Weimar-era style, he peppered his informative commentary with wicked asides and fascinating anecdotes. His eloquence and intellect shone through, as irreverent and poignant as the music he so loves.
Aided by Iain Grandage’s sparkling, idiomatic arrangements, Humphries’ collaborator Meow Meow showed why she is one of cabaret’s best exponents. Displaying a versatile timbre and flexible yet focused sense of line, she shifted seamlessly from hard-edged huskiness to clear-voiced power.
Meow Meow also had the uncanny ability to embody the essence of a song. Utter cynicism and vicious satire were leavened by her lightness of touch in Spoliansky’s Alles Schwindel. She created compelling, intensely dramatic accounts of Weill’s Pirate Jenny and Surabaya Johnny while Schulhoff’s infamous recreation of the female orgasm, Sonata Erotica, benefited from her self-mocking approach. Only Spoliansky’s duet Wenn die beste Fruendin failed to catch fire. Although beautifully sung by Meow Meow and Satu Vanska, they couldn’t fully conjure up its witty playfulness.
When Humphries performed with the ACO in 2009, the orchestra was often merely a backing band for his famous alter egos. This time, the ACO was an equal partner and the musical results were far more satisfying and stimulating.
Fearless experimentation marked the music of this era. Jazz hit Europe with the impact of a musical tsunami. Composers responded by trying to integrate jazz and contemporary classical idioms.
By and large, they succeeded. The ACO’s tight-knit, vibrant accounts of jazz-infused works by Krenek, Schulhoff and Brand brought to life their catchy tunes, swinging rhythms, and raucous sonorities. In contrast, the highly expressive, sensitively phrased accounts of two tango numbers by Schulhoff and Weill captured their soulfulness.
The orchestra even showed off their vocal chops in Toch’s Geographical Fugue for spoken chorus, realising its polyphonic textures and incisive rhythms.
The era of Weimar cabaret and German musical experimentation ended abruptly when Hitler took power in 1933. In this concert, Humphries, Meow Meow and the ACO brought it triumphantly back to life.”

“What in God’s name is a conferencier, anyway? I don’t think I’d so much as stumbled into the term until I attended the Australian Chamber Orchestra’s Barry Humphries’ Weimar Cabaret. Trust the incorrigibly erudite Mr H to be responsible for another notch on the rickety bedpost of my education. Turns out it’s the fit ‘n’ proper term for the MC, in European cabaret. What could be more fitting?
This concert is a veritable museum piece, in which Humphries is both curator and one of the exhibits. Curator, for it is he, the curiouser and curiouser raconteur and intellectual bon vivant (since we’re in the mood for French), who, as I apprehend it, has put together this programme of songs emblematic of that shining sliver of history that preceded the greatest cataclysm to sweep Europe, in the form of the infamous machtergreifung.

At 79, you might reasonably expect the confidante of luminaries like Dame Edna and Sir Les to be slowing down and, just perhaps, he is. But even while entertaining that suspicion (he relies autocue to help recall and relate anecdotes), he’ll surprise, as is his wont, with characteristic wryness: regarding his upbringing in Camberwell, a lovely garden suburb of Melbourne, “so lovely, people in Sydney can barely imagine it”. Touche!
While the affectionate tributes are flowing, yet another for the ACO and its adventuresome, peripatetic artistic director Richard Tognetti. It seems no musical territory is outside their sphere. Under Mr T’s superintendence, this orchestra bold goes; as intrepid, artistically, as Yuri Gagarin, cosmonautically. For this occasion, almost as theatrical as it was musical, thanks to Rodney Fisher’s sympathetic direction.
Who were those shadowy figures, clad (by Akira Isogawa) in muted monochromatics, rendered incognito by cloche, fedoras and homburgs? Why, the usual suspects, of course: the distinguished men and women of what is arguably the greatest chamber orchestra of modern times. To begin with, how many other such orchestras would be so sporting as to take on costumes and, to a certain extent, characters, let alone play jazz well enough to make jazzers jealous?
A rather well-kept secret is the presence of Meow Meow, who’s more tigress than pussycat; as much performance artist as cabaret diva. For this event, however, she gets her diva on and is touted by Humphries as “the star of the show”. Certainly, it’s an opportunity for her to show the depth of her talent, in a somewhat less flippant manner than her solo shows might reflect. Move over, Marlene. (Speaking of sensational singers, who knew, as we found out, Satu Vanska could vocalise as beautifully as she violinises?)
While the degenerate Weimar phenomenon holds, I expect, intrinsic fascination for many of us, Humphries regales us with such charming, poignant and poetic backstories, making the public personal, that an absolute novice to history would surely feel enchanted and compelled to enter a world of discovery that parallels Humphries’ own. Without a word of a lie, with his hypnotic, patient modulation and gift for embellishment in storytelling, he could make a Chinglish instruction manual sound eloquent and enthralling.
Seeing him and Meow Meow dance a Charleston, or tango, is fantastic fun (especially when Humphries denouements with a red rose ‘twixt and ‘tween his teeth, but hearing him wax lyrically, lovingly and expertly about the weird and wonderful music that emerged from the fragile and fading Weimar period is immensely fulfilling. So much so, that the ACO’s renditions are as icing on an already substantial cake, in which the scholarly becomes scrumptious.
Iain Grandage’s arrangements sonically clarify what might otherwise be coarsely cacophonous songs. A case in point: Alles Schwindel (It’s All A Swindle), with which the concert began. Written by Mischa Spoliansky and Marcellus Schiffer, even with its ironic oompah, it prefigures so much of the American popular musical heritage, while flashing a blade, in the disguised form of the mightier pen, at the corrupt, bankrupt zeitgeist.
It scans so much better in German, or Yiddish, but nonetheless the feeling isn’t lost in our more demure tongue.
Papa swindles, Mama swindles, Grandmama’s a lying thief!
It’s what Adolf would have had us believe about Jews, gypsies and others, but Spoliansky held a mirror up to the racist rhetoric, which worked like a magnifying glass on a curled-up leaf on a blazing summer’s day. Burn, Nazis, burn! Like a meticulously hand-rolled Cuban cigar, Spoliansky wrapped Schiffer’s bitterly cynical lyric in a bouncy, jazz-inflected toe-tapper. It cuts like a hot knife through butter.
By contrast (and there are precious many in this catholic programme), Ernst Toch’s Geographical Fugue has the entire orchestra place its instruments to one side and join in a spoken word chorus. Talk about the shock of the new. To underscore its jaw-dropping modernity, suffice to say no less an exponent of the experimental than John Cage was instrumental in ensuring its revival and performance when Toch escaped persecution in 1935 and landed in rather sunnier southern California. Assertively percussive, the piece shows just how musical language alone can be.
If Humphries musty, dusty nostalgia can be relied upon, preparations for this concert really began 60 or 70 years ago, while he rifled through the treasure troves that were Melbourne’s second-hand bookstores, as a schoolboy, in the 1940s. It was in one of these cobwebbed environs, on Swanston Street, that he happened upon a stack of sheet music he purchased for a very reasonable sum. In ’20s Vienna, the Universal music company was renowned and it was from this publisher that the music originated, somehow finding its way, like so many broken and bereaved refugees, to Australia’s southern capitals, in particular. From that moment, Humphries held composers hitherto unknown to him (such as Ernst Krenek, Erich Korngold, Kurt Weill and Franz Schreker close. His mother might’ve admonished him for his second-hand obsessions with, “Barry, you don’t know where that’s been!”, but it’s clear he discovered precisely where it had come from. And what it really cost.
The ACO uber alles! It’s as heartening as ever to see the bone pointed at fascism. Especially when it’s accomplished with such profound wit and inventiveness. Better yet, this concert demonstrates how forward-thinking composers were, 80 and 90 years ago, in exploring ways to bring jazz and classical music together. Which begs the question, outside the unpretentious ACO: why are we still so hung up (and so often) with breaching these borders, even while we see another Poland invaded?”