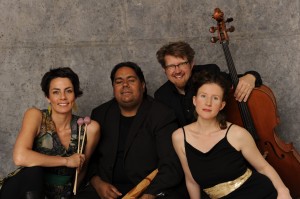 Formed for a tour of the Dampier Peninsula in 2007 and originally known as Windstrokes, Overlander brings together four of Australia’s leading musicians in a unique union – the funky rumbles of didgeridoo super star William Barton, the dulcet tones of singer/songwriter Mel Robinson, the boundless charm and wit of composer/performer extraordinaire Iain Grandage and the voluptuous strength and energy of percussionist Claire Edwardes.

The program features works composed and arranged exclusively by members of the group. Each musician has a different take on the Australian musical landscape and together their works combine to form a rich tapestry of sonic colours. With their casual approach to concert giving, Overlander creates a deeply evocative and poignant soundscape that is at once, moving, virtuosic and eclectic.

Biographies of other members:

William Barton is one of Australia’s leading didjeridu players and composers, and is a powerful advocate for the wider perception of his cultural traditions. Since playing his first classical concert with the Queensland Symphony Orchestra at age 17, William has collaborated with some of the worlds’ most cutting-edge artists, most recently a commission from and collaboration with members of the Berlin Philharmonic Orchestra. William aims to present the richness and wonder of the didjeridu, and also its compatibility with his other love: the guitar.

Claire Edwardes is recognised throughout the world as one of the most striking and important percussionists of her generation. She balances being a mother of two young girls with her co-artistic directorship of Sydney based new music group, Ensemble Offspring and her career as a soloist.
Claire collaborates regularly with composers and is a passionate chamber musician, recitalist and soloist committed to the advancement of innovative new music through the medium of percussion. Her new CD Flash (marimba miniatures CD) will be released imminently on the Tall Poppies Label.

Cellist, singer, composer and arranger Melanie Robinson is best known for her duo Mr Sister and her intricate collaboration with Tim Rogers. She can also be heard and seen with a variety of Australian artists, in concert and on record; amongst these are Washington, You Am I, Leah Flanagan, John Butler Trio, The Audreys and Jimmy Barnes. “A heart-stopper” (Sydney Morning Herald), with “a voice that will make your black heart beat again.” (AdelaideNow)