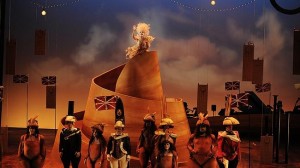 An music drama based on the children’s book The Rabbits by Shaun Tan and John Marsden.

Soundtrack is available on Spotify here 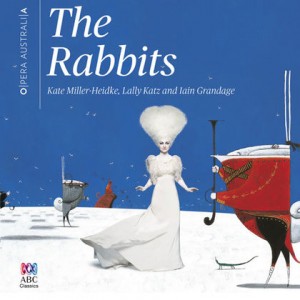 Director’s Note:
The Creation of The Rabbits

‘The rabbits came many grandparents ago’

The journey of creating the opera The Rabbits has almost been as epic as the journey in the book itself. This extraordinary piece of children’s literature landed in my hands almost 15 years ago and was my first introduction to both the incredible visual world of Shaun Tan and the very powerful and economic writing of John Marsden. I was immediately entranced by the book and spent many hours staring into each picture finding new discoveries that then lead me toward forming the stupid or brilliant – and certainly nothing less then challenging – idea of creating an opera / musical. Those hours turned into weeks, months and, then years before we arrived at where we are today. A sold out premiere season and four Helpmann awards later I am incredibly proud to have The Rabbits perform its second season in the Melbourne Festival – our commissioning partner, and later as part of the Sydney Festival 2016. I would also like to take a moment to acknowledge the incredible Sandra Willis, a soul mate on this journey. She has been, without doubt, the driving force in producing this show, indeed bringing The Rabbits to a live audience.

Containing universal themes and huge transformations of both landscape and characters, the epic story of The Rabbits perfectly lends itself to the artistic discipline of opera. Whilst at the artistic helm of Barking Gecko I have always been committed to pushing the boundaries of theatre for young audiences and what that translates to in creating works that challenges artistic conventions. Similarly Opera Australia, under the dynamic artistic direction of Lyndon Terracini, is expanding its reach by engaging with and developing new audiences of opera by producing works that excite and inspire young people. The synergies and visions of the two companies seemed a perfect fit.

Though aspects of the book make the story particularly pertinent to Australia, Marsden’s metaphorical text and Tan’s highly constructed universe are easily relatable to any study of colonial history. The story provides clear and unsentimental empathy with indigenous cultures and presents a powerful study of a people and a land overwhelmed. To achieve the universality of the themes laid out in this work Rachael Maza has been instrumental in guiding the team through the respect and sensitivity that is fundamental to such a work, and we thank her enormously for sharing her time, stories and wisdom. I would also like to acknowledge Reconciliation Australia for their invaluable input.

The Rabbits boasts a team of Australia’s finest pedigreed artists boasting a string of awards that has lead them all to international recognition. When Lyndon first introduced the concept of Kate Miller-Heidke composing the work, I found it to be an inspired connection. I had known of Kate having heard several of her albums and having witnessed her performance in Jerry Springer the Opera. Miller-Heidke is a trained soprano who happens to sing pop music, a songwriter who can marry drama and the high technique of opera to a butterfly sweetness in what I have coined, ‘indie op’, – and she is funny! Alongside Kate we added to the musical mix the very genius and generous ‘collaborator of all collaborators’ Mr Iain Grandage. Bringing them both together with Lally Katz, one of Australia’s most prolific and respected, if unclassifiable, young playwrights, and we have a work that has cleverly weaved the strangeness and unhinged surrealism of the world of The Rabbits through the libretto. With Gabriela Tylesova’s extraordinary set and costume design we completed the team – she brought to The Rabbits a riot of colour, exquisite detail and imagination, and has brilliantly honoured the haunting mythological landscape of Shaun Tan’s world.

I strongly believe that our epic storytelling of Marsden/Tan’s The Rabbits coupled with the mixed art form of opera and musical theatre will enable rich discussion, promote cultural awareness, be richly entertaining, and introduce a whole new generation of audiences to the world of musical story telling. We hope you are immersed in and enjoy this thoroughly new and exciting imaginary world.

KMH’s Programme Note :
When I was first approached to write music for The Rabbits , I read the book and felt very confused. ‘But it doesn’t have a plot (in the traditional sense)!’ I said to John Sheedy on the phone. ‘It doesn’t have characters!’

After chatting with John, it became apparent that he has a radical and fearless approach to storytelling. It wasn’t going to be a traditional linear ‘opera’; it was going to be an opera/musical/song cycle/weird pop concert/puppet show/art-play.

Lyndon Terracini, who was instrumental from the start, emphasised a really fun sense of experimentation throughout the process. At no point was there an expectation that The Rabbits would fit the rules of traditional ‘opera’.

This new hybrid beast appealed to me a great deal, as my musical background is a bit of a mash-up – I studied classical voice and have performed in operas, but my main career has been in pop music as a singer-songwriter. Musically, this concept gave me great creative freedom.

As the process went along the musical language started to crystallise into a kind of triangle – the low, loud, slightly Gilbert and Sullivan-esque Rabbits; the more naturalistic, defiant, poppy Marsupials and the alien Bird. There’s a layer of sinister humour and strangeness over the whole lot.

Certain parts were added and modified after we chose our magnificent cast, all of whom have distinctive voices and talents. Although the story is about a fight between two groups, it was important to us that we get a sense of each individual.

Special mention must go to Kanen Breen who completely changed voice type for this role, and now has a potential new career as a counter tenor.

Iain Grandage’s masterful arrangements, golden suggestions and between-scene music helped this process enormously. This is the first time I have composed for the theatre, and I have learned so much from Iain (at least I hope I have) – he is the most sensitive, brilliant collaborator imaginable.

Also, Lally Katz’s sparkling libretto was a joy to work with. Her words have such innate character and colour that it often felt like the songs were writing themselves.

After: Shaun Tan and John Marsden’s book The Rabbits