Tim Minchin vs The Orchestra 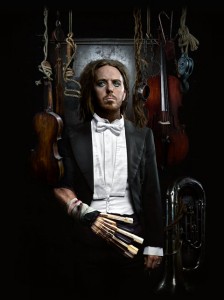 Additional Media : A DVD of Tim Performing Live at the Albert Hall with The Heritage Orchestra is available in many commercial outlets.

Tim Minchin versus WASO Round II

He may call himself a “rock and roll nerd”, but as Tim Minchin proved to his near sell-out crowd at Challenge Stadium on Friday night for the first of his two hometown shows, the dimension of his talent goes far beyond just that.

Back for Round Two of his bombastic live show with the WA Symphony Orchestra that wowed audiences across the nation last year, the Perth-bred comedian seemed happy to be back on home turf and ready to offend.

From the moment he emerged trapped in a cage like some sort of wild animal, all bird’s nest hair and blacked-out eyes, Minchin commanded attention and locked it away until the final note of the night was played. Not once did he seem daunted by the 55-piece orchestra behind him, instead he used its energy to augment his own and make the show so much more than one nerdy guy on stage.

The whole performance was seamless, with Minchin weaving from grandiose musical numbers to satirical ruminations to showing off his impressive piano skills, but in a way that felt comfortable and not overly rehearsed. Whether he’s told the same jokes many times before or not, it didn’t matter – Minchin delivered every line in an off-the-cuff and natural manner that had the crowd in stitches even if they already knew the punchline. It was almost easy to forget about the 4000 other people in the arena and imagine he was sitting down telling the story to only you. That is, until he leaped up into song again.

It may be Minchin’s musical diversity that ultimately makes him so intriguing. From the haunting piano-backed Beauty to the rollicking, toe-tapping Prejudice to the epic anthem Dark Side complete with free jazz interludes, Minchin is a jack-of-all-trades when it comes to style and pulls off each song with as much fervour as the one before.

Yes, the lyrics are unashamedly provocative and verging on ridiculous at times, but the enchanting quality of the music makes the experience both a delight and a challenge to the senses.

While WASO does a wonderful job at accompanying Minchin through the two acts, it’s not until the encore of Not Perfect that the orchestra really came into its own. Conductor Iain Grandage’s stunning arrangement made it possibly the most serious and thought provoking moment of the evening and a perfect note to end the show on.

Minchin left the stage promising to come back next time with something new, and after that performance we are all excited at the prospect.