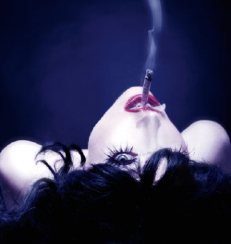 For a long time now, I have been drawn to the fin-de-siecle rottenness of Western Europe at the turn of the century before last. My lecturers at University spoke of the emancipation of dissonance, of opium pipes and absinthe, of tonality stretched to breaking point, of transgressive dancing and nudity. Certain salient facts stuck.
In composing a new set of cabaret songs with Meow, these threads (which had by now inveigled themselves deeper into my consciousness) suddenly found their focus. I found grandiose late romantic Mahlerian lushness inappropriately entwining itself with Piazzolla. Pierrot Lunaire was in my frontal lobe, making out with Ann Margret. A Weimar siren was plucking Jimmy Page’s guitar. These unearthly couplings eventually evolved into the seven songs that form the core of tonight’s concert for lost souls.
Needless to say, it’s been a thrill to work with Meow, but also with the band, who re-imagine things far beyond what I (or my old lecturers) could conceive.

By: Meow Meow and Iain Grandage