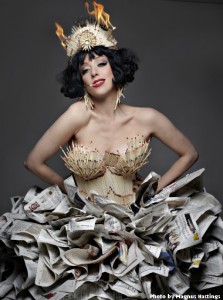 MEOW Meow takes as a point of departure Hans Christian Andersen’s morality tale about the homeless Little Match Girl. The show then flies off in all directions, and while such flights of fancy mostly lack any real connection with their original inspiration, they remain cheeky, edgy and entertaining. Such is the skill and savvy, the wit and watchability of Meow Meow.
The artist’s signature style is a kind of ”seriousness interruptus”, a determination to disrupt the audience-performer relationship as often as possible so we never get too caught up emotionally; she never sings a song right through without undercutting it with a snappy one-liner (”I’m real, not a television!”) or a mock stage-business mishap.
The old ”lighting grid’s exploded but the show must go on” ruse kicks in early and for much of Little Match Girl, Meow Meow is lit by mobile phone torches supplied by the audience (”Light my face not my crotch!”) and makeshift lamps provided by her hapless sidekick (Mitchell Butel does a brilliant turn as the befuddled and ardent fan) who scuttles on and off stage accompanied by his demented diva’s barks and meows.
Amid the chiaroscuro of torchlight, Meow Meow delivers a torch song echoing the best of them – Streisand’s sentiment, Midler’s sass, Minnelli’s angst, Garland’s longing, Ute Lemper’s Germanness and Betty Blokk Buster’s satire. She’s a postmodern corseted dame with attitude. Ungainly one minute, elegant the next, this cat will cajole you with her little-girl-lost routine and then scratch your eyes out for caring.
There are beautiful original love pop songs (Iain Grandage) and her rendition of Laurie Anderson’s The Dream Before and Butel’s O Du, Mein Holder Abendstern (Wagner) are a knockout.
Noel Coward’s What’s Going to Happen to the Tots?, although done with expert requisite camp, felt gratuitous.
A thrust stage, a brass bed, a band and a massive chandelier that hangs provocatively throughout the show until finally fulfilling its coups-de-theatre promise provide the setting.
Marion Potts has done a great job keeping things more contained and theatrically legible than past, more chaotic incarnations of Meow Meow’s I have seen over the years.
Elly Varrenti The Age, Melbourne 18/11//11

For a cabaret artiste called Meow Meow, this is a performer who has always seemed more of a bird than a cat. She is flighty, constantly startled, her feathers always a little ruffled. The thrill of watching her in full flight — and it is indeed a thrilling spectacle — comes from knowing that she could easily careen head-first into the ground.
The tale of the Little Match Girl gives Meow the precipice from which to leap. She takes Hans Christian Andersen’s Christmas story of the small girl trying to sell matches in the winter streets and loosely hangs her show on this sad tale.

It’s a simple story and the metaphor works. In the fairy tale, the young girl dies alone in the street because no one reaches out to help her; in this show Meow demands, often forcefully, the audience’s assistance. She will not go into the darkness without desperately trying to use every means at her disposal in engaging the audience’s help to keep her show airborne.
In cabaret, audience interaction can easily be a crutch for a performer to gain control of the stage by humiliating unsuspecting and unwilling members of the crowd. Although Meow uses the audience in Little Match Girl, utilising dozens of people in her attempts to keep her show going, she is not in the business of putting them down. The difference is important: it is Meow who places herself as the butt of each joke and the audience member is always cast as the good Samaritan who saves Meow from potential disaster. Her barbs point inwards, and the audience is always protected and respected.
If Meow Meow is the little match girl and the audience the passers-by in the street, the songs themselves are her matches, spluttering into life before going out, often too soon. It’s nothing if not an eclectic selection, traversing Cole Porter to Laurie Anderson, Richard Wagner to Megan Washington, with some Noël Coward thrown in for good measure. We are allowed to experience the full spectrum of Meow’s vocal range as she mines the music for its joy and its sorrow.
On stage, Meow Meow is less a performer than a phenomenon. Under director Marion Potts’ assured eye, Meow demonstrates her array of talents as comedian, dancer, performance artist and diva. She is supported by the delightfully gifted Mitchell Butel as fan-boy and saviour, who effortlessly matches Meow in wild-eyed commitment. Butel’s version of The Book of Love by The Magnetic Fields is a highlight.
Versatile music director Iain Grandage also serves as composer, arranger and co-writer with Meow of a handful of original numbers. Grandage leads a tight band (Stephen Fitzgerald, Benjamin Hauptmann and Xani Kolac) seamlessly through the diverse musical genres.
Stemming from an act Meow devised for New York’s Joyce Theatre, the show has been beefed up into an 80-minute full-scale production. Playing in the Malthouse’s large Merlyn Theatre, this is a big show. With a giant thrust stage, elegantly designed by Anna Cordingley and lit by Paul Jackson, complete with a revolve and a grand chandelier, Meow has a vast canvas to work upon.
When the show travels north for an already sold-out Sydney Festival season, somehow the production needs to fit into The Famous Spiegeltent. In this more cosy venue, one can only imagine how Meow might blow the roof off the tent. For within the slick spectacle of this theatre production, some of the dangerously sharp edges of her previous outings have been smoothed over, and the audience, although lapping up the sense of danger, may find it hard to truly believe that the show will self-combust as it veers towards chaos.
At its heart, Little Match Girl is a magical and tender tribute to the creation of art and its place in a cruel and unforgiving world. Meow reveals the pain beneath the frivolity of her act and reaches out to take hold of her audience, dragging them into her mixed-up and confused world. Her voice manages to knock both your socks off and then, in an instant, hold you close and whisper lullabies in your ear.
With Little Match Girl, Meow Meow has created a show that allows her to take flight, swoop perilously close to the earth and then fly straight into the sun, exploding into a fireball of sequins and snowflakes.
Ben Packer, Curtain Call on Crikey 18/11/11

By: Meow Meow and Iain Grandage